The opinions and views expressed here are my own, and do not reflect those of my employer.

MSFT has just released a new beta of EMET (Enhanced Mitigation Experience Toolkit) v4 and one of the new features is certificate pinning. Pinning was introduced into mainstream usage by Google Chrome in 2011. Soon afterwards it proved instrumental in exposing the DigiNotar certificate authority breach that allowed Iranian government to intercept communications from political dissidents.

To recap why pinning is an important security feature: as described in earlier posts, the current trust model for digital certificates has a systematic flaw. Almost any one of 100+ trusted “certificate authorities” can fabricate a certificate on behalf of any company– even those located in a different country and have no business relationship with the CA. Such a credential will be happily accepted as authentic by web browsers and every other application about to make critical security decisions based on the identity of the website at the other end.

On the one hand, a diversity of CAs each serving different market segments is great for scaling the model commercially. On the other hand, a situation where all CAs are equally trusted and any one CA can undermine the security of websites served by a peer  leads to a quick race to the bottom in security. There is little incentive for competing on operational security or honesty, when customers are still at the whim of every other CA. Pinning addresses that problem by allowing a website to commit in advance to a set of CAs that it will do business with. That commitment takes all other CAs out of the risk equation. Even if they make a mistake, are compelled by a government to forge certificates or are simply dishonest, any certificates issued for the pinned site will be rejected by users aware of the prior commitment.

The catch is there is no standard for making such commitments. There is no field in the X509 format for a website to declare its intentions about what other CAs it may get certificates from in the future. (There is a draft RFC for HTTPS usage but that is at best partial solution. HTTP headers will not address the code signing case, for example.) Instead both Google and MSFT introduced their own home-brew designs independently. 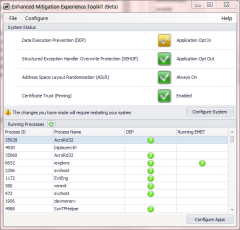 Here are some preliminary observations based on experimenting with a beta of EMET and comparing it to the existing pinning feature in Chrome: (This post may be updated as more information is available.)

Notification for a certificate pin error

One thought on “Certificate pinning in Internet Explorer with EMET”

The opinions and views expressed here are my own, and do not reflect those of my employer.